2go game is becoming a very popular category on 2go which is a social networking app from South Africa, well am sharing how to anagram with your pc on goword. This is not new on 2go there have been so many anagrammers on 2go but anagramming on for the first time might be new to some 2go users.

Lets get straight to the point…

Firstly, you need to install 2go on your pc you would need to download the files below;

How To Run 2go On your Pc

After downloading all mentioned above, you have successfully performed the first step. Moving to the next phase to run 2go you need to extract the micro emulator in the zip file to a folder and open the micro emulator application.

Note: if java runtime is not installed on your pc, then it’s difficult for your micro emulator to open to install it properly.

✓ Also Read:  Most Searched Things By Nigerians In 2019

Now drag the downloaded 2go.jar to the micro emulator and the 2go is meant to open. The trick to anagram all the words and hit the highest point starts here, so get ready to anagram… 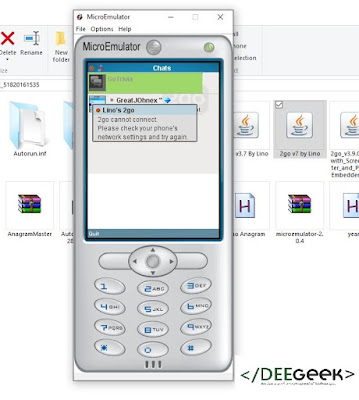 You need a script to run so you can anagram the words faster, I won’t be sharing the script but would teach you to create a script.

How To Create 2go Goword Script

To create 2go goword script for anagramming is very easy.

Right-click your mouse on your desktop scroll to new and a new popup side should appear look for the auto hotkey script and click it then copy and paste the below code in the file;

After pasting the code save the file and that’s all, you ready to anagram double-click the script to run, now you can open your anagram solver using the same way you extracted the micro emulator and locate the anagram solver.

It’s much easier here just go to 2go which you opened on your pc and go to goword room wait for the question like “ d g e e k e e” that’s the word you would type in anagram solver and select the length of words you want to paste starting from 3 – 9.

After that click, the clipboard and go back to the 2go running on your pc and click CTRL + D and you should start seeing the magic now… don’t smile alone share this with someone using pc on 2go.

Gaming with speed on Gotrivia coming soon… The fun side about 2go is gaming, that’s what keeps 2go live and active…

Faqontech and its contents are protected by COPYRIGHT LAW (DMCA) with high-priority response rate. Reproduction without permission or due credit link back will cause your article(s) to be removed from search engines and disappearance of Ads on that page if monetized with Adsense.

NOTE that Your Adverts can be placed here on Faqontech either Banner, Link or Text ADS We got you covered, We have different advert space waiting for you. Want to know more about our advert placement click HERE

I'm Ayorinde Ayodeji known as Geek Deelino a certified digital marketer, Full stack developer & Designer. Am always ready to share information with everyone who is ready to read, here I share interesting articles with faqontech readers

Introducing How PiggyVest works – Saving and investing with piggyVest

Sponsored: FreshHitz is the Best Blog to Get...

10 Video Games You should Play

How to Connect Your Android Phone to Your...

How to Double Airtime From Zenith Bank

MTN Cheap Data: How to Get Free MTN...